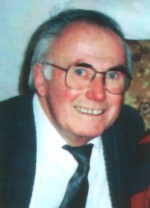 Herbert Graef born in 1924 and was a deacon in William Branham's tent meetings from August 12th to August 19th, 1955 in Karlsruhe, Germany. The following testimony was written by Herbert only a few months before he passed away in 2006.

55,000 people were counted during the time of these meetings; in the afternoon meetings approximately 1,200 to 1,500 believers attended. People came from all parts of Germany, even from the Eastern part, from Austria, Switzerland, France, Netherlands, Belgium, Denmark, England, USA, the Middle East, and Venezuela to experience the blessed ministry of Brother Branham. A tent for 8000 people had to be set up because the city of Karlsruhe couldn’t provide an adequate auditorium. Towards the end the tent couldn’t hold all the visitors any longer, and hundreds of people had to remain outside.

It was overwhelming in those days to experience the many signs and wonders that God performed through the ministry of His servant Brother Branham; like in the days of Jesus Christ walking on this earth. The blind, lame, deaf and people tormented by the devil were healed and the gospel was preached to the poor. It is impossible to tell everything what I have seen in those days with my own eyes. But I want to relate a few of them.

How wonderful it was to see when a gout-ridden man raised from his cot, or the healing of a woman, who was disabled from rheumatism and gout. The next day this woman passed by the tent with her bicycle. Whom the Son sets free is free indeed. Amen! A blind-born girl was instantly healed, as well as a 34 year old man, who was blind from an accident.

Since I was a deacon and led the people to the platform, I was a witness, when a young woman with one leg shorter than the other, was healed by prayer. Before this woman came up to the platform she took off her special shoe and limped to Brother Branham. After prayer she limped back to the descent praising God for her healing and there her legs were equally long and healed. A woman from Galldorf/Würth was healed of stomach cancer. There were so many cases, which the doctors had given up.

Healing of Man with leukemia

A very outstanding case for me was the healing of a man with cancer in his blood. To describe it right, I have to go way back. I was saved in the year 1951 by the ministry of Brother Erwin Müller in a house meeting in Württemberg. Through this I got in contact with family Schäufele. Grandmother, mother and son were believers, but not the father. Because I was often in Karlsruhe and always visited this family, I couldn’t help but pray for the father. Son Wolfgang was one of the translators in the Branham-meetings. One day while the family had left to the tent for a service it came into the father’s mind to call his sick colleague to see, how he was doing. At the same time the wife of this colleague wanted to leave their home to drive to the hospital, when she got a call, “If you want to see your husband alive, come immediately because he wouldn’t survive the night." The woman had already left her house when she heard the phone ringing again, and she went back to answer the call. The caller wanted to know how the colleague was doing. When he heard that he would die that night, he didn’t know how to comfort the woman and told her that there was a tent in the city and that a man was praying for the sick and many were healed.

In her distress the woman had her husband transported with an ambulance to the tent. Brother Branham was praying for the people in the prayer line, when he suddenly pointed to the cot, “You are a candidate of death, given up by the doctors. You have cancer in your blood in the final state. Thus says the Lord, get up, you are healed.” There was no movement on the stretcher, and again the call came twice, “Rise up,” no movement. Brother Branham said, “The Angel of the Lord is grieved and is turning aside.“ Then the sick man moved suddenly and rolled from the stretcher and was healed. His partially blue and purple skin color left and he was normal. The wife screamed and asked the daughter to call a taxi. I went to the woman and offered to drive her home with my car. I rode home with the family and because of the excitement I forgot to undo the hand break. The woman told me they were atheists and never believed in God, “but tonight we saw that there is a God whom we will serve.” Through this event the father of the translator, teacher Schäufele, believed in God. Hallelujah – this healing was my greatest experience - God healed a man, that never had accepted God – God is love -– Amen.

The Nature and Ministry of William Branham

Also critics and opponents came into the tent, but they all were silenced when they experienced how simple and humble Brother Branham was. There was not a show. All the time Brother Branham said, “I am not the one that does the healing, it is God, who heals and your faith.” Brother Branhams meekness and humbleness always pointed to Jesus Christ. When he came to the platform with the words, “Good evening friends! I am glad to be with you,” everybody could feel the love of God permeating from his being.

Brother Branham always pointed away from himself towards Jesus Christ, Who alone has the power to heal the sick. “Let us go with His love in our hearts to the people. Let nothing separate you, let us stay together as we are now.” God’s love and His spirit may lead and guide us. We want to be united with all our brethren, with love towards all without any pre-justice. That’s the only way that we can love one another and have fellowship. May we come together to have fellowship around the Word of God.”

At the age of 78 years, Brother Bosworth had come from America for support. He prayed with deaf and dumb and many were delivered. The center of the message was the Word of God. Brother Bosworth said, “Most of the time of my life I have preached the promises of God to the people! Through this I found out that the Bible has 3827 promises and God wants to fulfill each and every one of them. Amen! People ask for prayer but they don’t recognize what God requires! What God wants to do for the people is far greater than what men could ask from God. Amen! I would rather doubt that it is possible that God can do it than to doubt that God wants to do it!“

Let us believe all promises, which are in the Word, if we want to be redeemed. Therefore read the Bible, the Word!